HNW clients might feel guilty or defensive today about their wealth, particularly after a period of relentless comment about "the one percent" and narratives of widening wealth inequality. This article might provide advisors with some ideas on how they should speak to clients on the subject.

This publication welcomes back regular commentator, businessman and academic, Dr Rainer Zitelmann. He recently published a new book, "The Rich in Public Opinion", which uses data commissioned by the polling firm Ipsos MORI and from the Allensbach Institute. It surveyed a total of 4,000 people in the UK, France, Germany and the US about wealth and attitudes towards the super-rich.

Dr Zitelmann sounds the alarm that prejudices against the rich are real and widespread in society as well as in the media. He inspects how many people think about ultra-high net worth individuals, and probes emotions. Perhaps in ways that are uncomfortable, Dr Zitelmann uncovers what he sees are negative stereotypes, prejudices, and scapegoating.

The issues at stake - as anyone reading the troubling news about lockdowns, civil unrest and anger about racial prejudice will know - are hugely relevant. With inequalities of wealth magnified by central bank money printing â which tends to inflate asset prices â calls to tax and regulate the âOne Percentâ are going to get louder in the approach to the US Presidential Elections in November. Beyond the political battleground, such an analysis will inform wealth advisors about the sort of conversations they should have with their clients and clientsâ families.

As always, editorial disclaimers apply to views of outside contributors. To jump into the debate, email tom.burroughes@wealthbriefing.com and jackie.bennion@clearviewpublishing.com

For envious people, the rich are primarily scapegoats for pinning the blame on for all manner of crises. For people who experience little or no envy, on the other hand, the rich are role models. How the British feel about the rich depends above all on how envious they are. This is one of the key findings of a representative survey of 1,002 British people conducted by Ipsos MORI and just published in the book The Rich in Public Opinion.

This study employed a very narrow definition of envy. Accordingly, envy is not primarily driven by an aspiration to improve oneâs own position, but by a desire to make life worse for the rich. Based on the answers to a series of envy-related questions, the study finds that about half of the British respondents experience little or no social envy, while one in five is very envious.

The surveyâs respondents were presented with a list of personality traits and asked, âWhich, if any, of the following are most likely to apply to rich people?â

Their responses varied significantly, depending on how envious they are. For example, 40 per cent of enviers say that rich people are self-centred, ruthless and greedy, in contrast to only 15, 20 and 14 per cent of non-enviers, respectively (see figure below).

Attribution of personality traits by rank on the Social Envy Scale

Question: âWhich, if any, of the following are most likely to apply to rich people?â 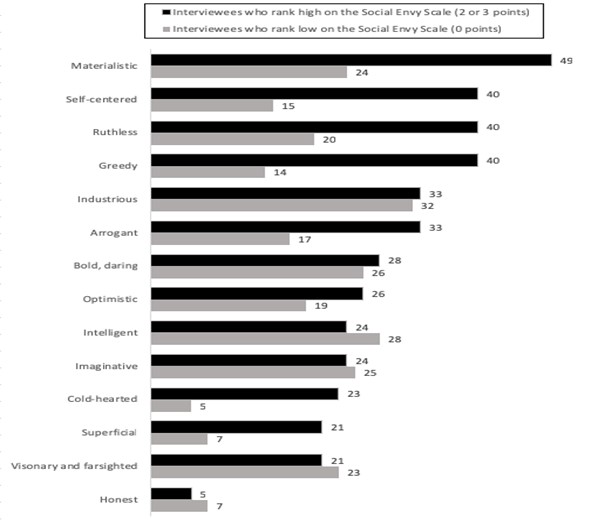 Another of the studyâs findings is that 41 per cent of non-envious Britons regard rich people, especially the self-made rich, as role models. Enviers, on the other hand, tend to scapegoat the rich: 33 per cent of social enviers in Great Britain blame the rich, who want more and more power, for many of the worldâs problems, such as financial and humanitarian crises.

The survey also reveals that envious Britons are particularly prone to zero-sum beliefs. Most enviers agree that the more the rich have, the less there is for the poor. Of Labour voters, 48 per cent have a zero-sum mindset, compared with just 17 per cent of Conservative voters.

On a whole range of issues, as might be expected, there are significant differences between what Conservative voters and Labour voters think about the rich. For example, 45 per cent of Conservative voters say that society as a whole benefits from the existence of rich people, as many of them are entrepreneurs who have created new products, but only 20 per cent of Labour voters support this view (see figure below).