The bank is cutting as many as 18,000 jobs, reports said, as it reduces exposures on its investment banking side, and shuts equities sales and trading.

(An earlier version of this news story appeared on Family Wealth Report yesterday, sister news service to this one. This item is updated for share price and analysts' reaction.)

Deutsche Bank stressed its commitment to wealth management, an area expected to come into sharper focus after Germanyâs biggest lender announced that it will get out of equities sales and trading and shrink corporate and investment banking assets. As many as 18,000 jobs are reportedly being shed.

Christian Sewing, chief executive, said it is accelerating changes to boost profitability. The bank recently abandoned attempts to merge with Commerzbank, Germanyâs second largest bank. The bank will cut costs, reducing adjusted costs to â¬17 billion ($19.1 billion) in 2022 and target a cost/income ratio of 70 per cent in that year. Deutsche Bank said it expects to report a second-quarter pre-tax loss when it announces results on 24 July.

Investors appeared to be unimpressed. Shares in Deutsche Bank were down by 4.3 per cent at around 15:30 local London time yesterday, at â¬6.85 per share. Broader market indices also fell yesterday.

"Deutsche Bankâs grand restructuring plan comes with significant execution risk. Even assuming everything turns out as planned, the fact remains that most of the big European banking groups are years ahead in their redesigns. Competitive success for Deutsche Bank is not a given. Scope downgraded Deutsche Bank on 28 May, saying `the road to successful business-model recalibration and a return to sustainable profitability is still steep and fraught with uncertaintiesâ. Sundayâs announcements donât change that'," Scope Ratings said of the bank's changes.

Germanyâs largest bank â with a footprint in the US, Asia and other parts of the world â has been struggling with heavy costs and lowering profits. It is seen in some ways as a bellweather for the German economy and eurozone.

As far as this publication knows, wealth management jobs are not directly affected â in fact the bank last week announced it plans to hire hundreds of client-facing staff in the next two years. Such moves fit with a pattern of banks cutting balance sheet exposures and focusing on less capital-intensive areas instead. For example, since 2008 Switzerlandâs UBS and Credit Suisse have focused more on wealth management.

In a call with journalists, Sewing said: âWe will further strengthen our wealth management franchise by building on its strong German and European businesses. Particular areas of growth and investment will be the Americas and our emerging markets region, which includes Asia-Pacific and the Middle East. And we will go âall inâ on digital.â

Even so, with some large banking groups stressing how they provide wealthy clients with access to its balance sheet and range of investment know-how, questions arise over whether big cuts to the IB side of a business could affect wealth management in certain ways. This publication understands that in Deutscheâs case the impact should be limited not just because the parts of the investment bank that cater for wealthy clients will be relatively less affected by the cuts, but also because wealth management has in-house advisory capabilities and an open-architecture platform.

One report (Guardian, 8 July), said 18,000 jobs will be cut. This publication has sought to confirm those figures and add details and may update in due course.

Changes
âDeutsche Bank will exit its Equities Sales & Trading business, while retaining a focused equity capital markets operation. In addition, the bank plans to resize its fixed income operations, in particular its rates business and will accelerate the wind-down of its existing non-strategic portfolio. In aggregate, Deutsche Bank will reduce risk-weighted assets currently allocated to these businesses by approximately 40 per cent,â the bank said in its statement on Sunday.

Deutsche Bank said it will create a new âCapital Release Unitâ to manage the âefficient wind-downâ of the assets related to business activities, which are being exited or reduced. These assets and businesses represented â¬74 billion of risk-weighted assets and â¬288 billion of leverage exposure, as of 31 December 2018.

The firm said its cuts will allow it to invest in corporate banking, foreign exchange, financing, origination and advisory, private banking and asset management.

To restructure, the bank said that it expects to take about â¬3 billion of aggregate charges in the second quarter of 2019, of which approximately â¬200 million would affect Common Equity Tier 1 capital.

These charges include a deferred tax asset write-down of around â¬2 billion and impairments of approximately â¬900 million. It predicts it will sustain further restructuring charges in the second half of 2019 and subsequent years. In all, it expects cumulative charges of â¬7.4 billion by the end of 2022.

Results
Including the charges related to the restructuring, Deutsche Bank expects to report a second quarter 2019 loss before income taxes of about â¬500 million and a net loss of â¬2.8 billion. Excluding these charges, Deutsche Bank expects to report second quarter 2019 income before income taxes of approximately â¬400 million and net profit of â¬120 million. Results reflect revenues of â¬6.2 billion with non-interest expenses of â¬5.6 billion and adjusted costs of â¬5.35 billion.

The bank intends to release second quarter results on 24 July 2019. 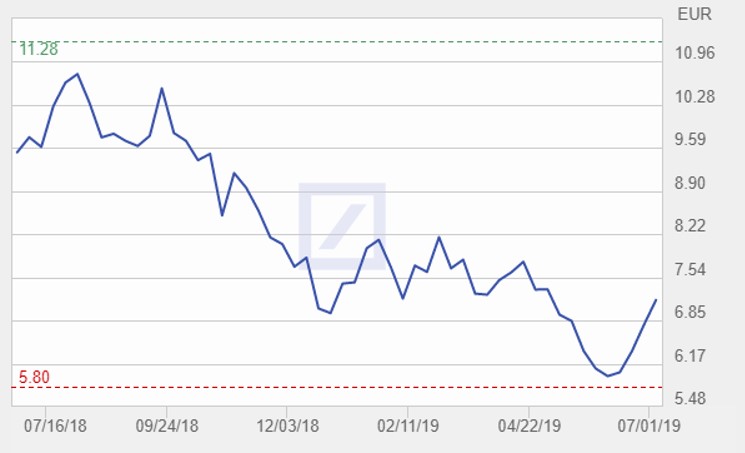 Speeding up
Sewing said in his statement that he regretted the job cuts but argued that the bank had no choice in acting decisively.

âWhat we have announced today is nothing less than a fundamental rebuilding of Deutsche Bank through which we are ushering in a new era for our bank. This is a rebuilding which, in a way, also takes us back to our roots. We are creating a bank that will be more profitable, leaner, more innovative and more resilient. It is about once again putting the needs of our clients at the centre of what we do â and finally delivering returns for our shareholders again,â Sewing said.

âGoing forward, our investment bank will be smaller â but all the more stable and competitive. The strict separation between private and corporate clients also means we will have a much more focused private client business,â he said.

Sewing said the bank wants to achieve a post-tax return on tangible equity of 8 per cent by 2022; he said the bank was ânot far awayâ from that goal and was already on track to reaching it in its private banking arm.

The corporate bank will be led by Stefan Hoops, who will report to Sewing; Mark Fedorcik will be head of the investment Bank. Ram Nayak will head the fixed income and currencies business. Both will also report to Sewing. The private bank in Germany will be led by Manfred Knof, former CEO of Allianz Germany. Ashok Aram will lead the international retail business (including international commercial clients) and Fabrizio Campelli will lead the wealth management Business. All three will report to Sewingâs deputy, Karl von Rohr.

Asoka WÃ¶hrmann will continue to lead Deutscheâs asset management business DWS and will also report to Karl von Rohr. The newly-formed Capital Release Unit will be led by Louise Kitchen and Ashley Wilson, both of whom will report to Frank Kuhnke.