The Swiss bank's second annual survey of ultra wealthy families finds that health has eclipsed regulation as a top concern, but current governance structures are no match for today's complex wealth picture.

In its Annual Family Barometer 2021 survey of UHNW families, Julius Baer saw health rise up in the ranks of concerns. The top two priorities for families remained wealth and governance, but health replaced regulation to take third spot in this second annual study of their wealth picture.

The shift has put greater focus on jurisdictions with good healthcare systems when choosing where they spend their time. Similarly, the report found that good infrastructure and public services have also taken on a new importance for wealthy families.

The study by the Swiss private bank took in views from more than 800 experts in wealth management advising UHNW clients and their families.

The macro trend for the sector more generally is the growth of multi-family offices as wealth accumulation continues to grow and become more complex to manage.

âFor individual families with less than $1 billion, the overheads of running a single-family office can become disproportional and prohibitive. Given these commercial dynamics, MFOs have become fashionable and their economics viable. More of them are also becoming increasingly international, as geographical reach and scale have become more important,â Julius Baerâs head of Intermediaries APAC and EMEA, David Reymond, said.

The trend has exposed a gap in family governance that isn't being adequately managed by families or their advisors.

Even though families need a clear framework for how they operate, the report found that only roughly one in ten ultra-high net worth families had adopted any formalised governing structure. Feedback also indicated that for every second family, decision-making lay with just one person, and for the most part wealth and legal specialists only engaged with the patriarch or the matriarch as this chart reveals. 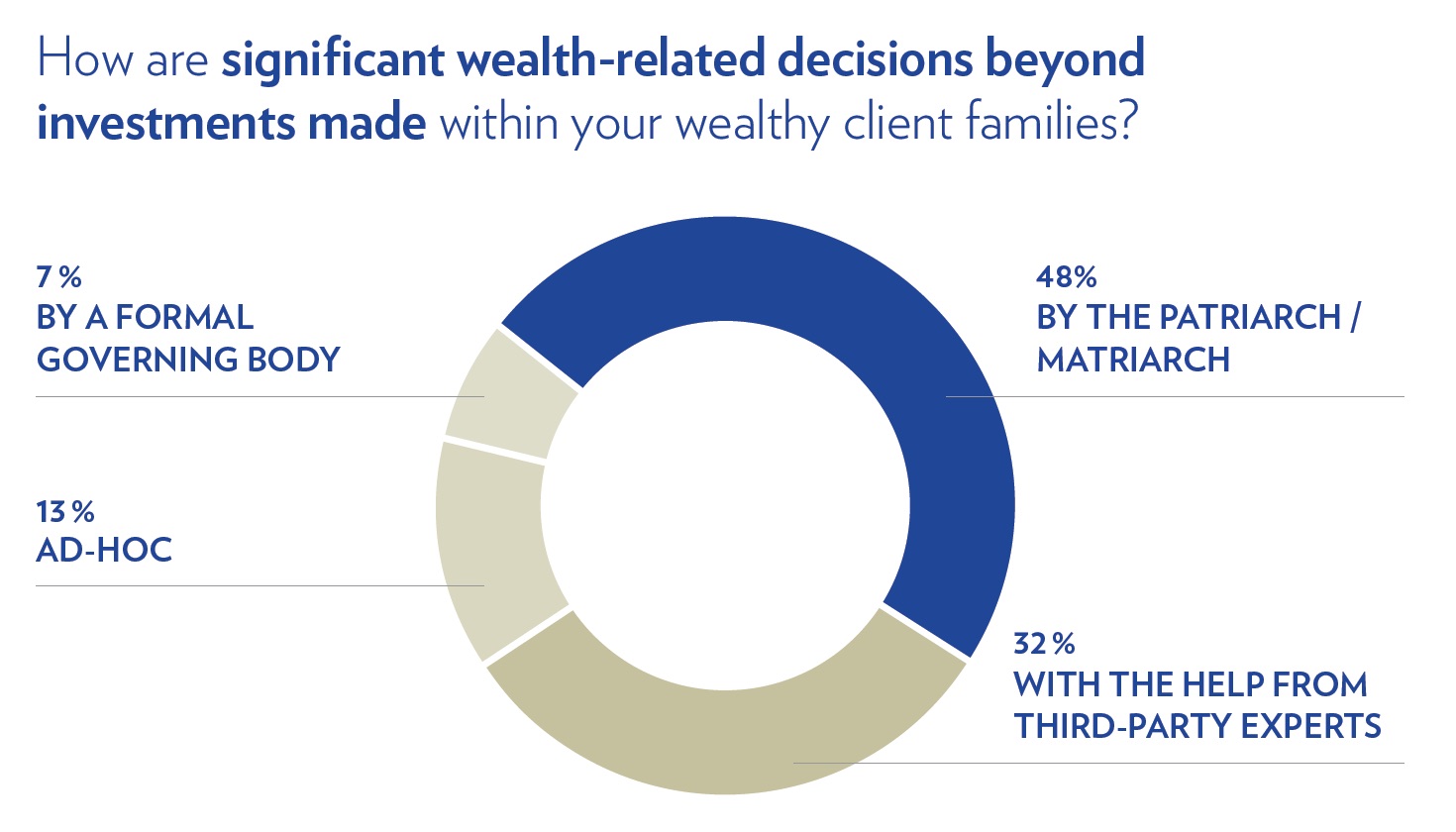 Investment trends
The two most active inquiries in investment discussions among families were ESG and private investments. The appeal of the latter for families operating in an MFO is their exclusivity and relative stability during volatile markets. Another factor driving the trend is that many impact investments are also private market investments, and there has been a strong appetite for both, the authors said. They also flagged the potential for increasing conflict between family generations as views diverge and ESG interest grows. "Good family governance and the support of independent advisors is even more important" in this instance, it said. 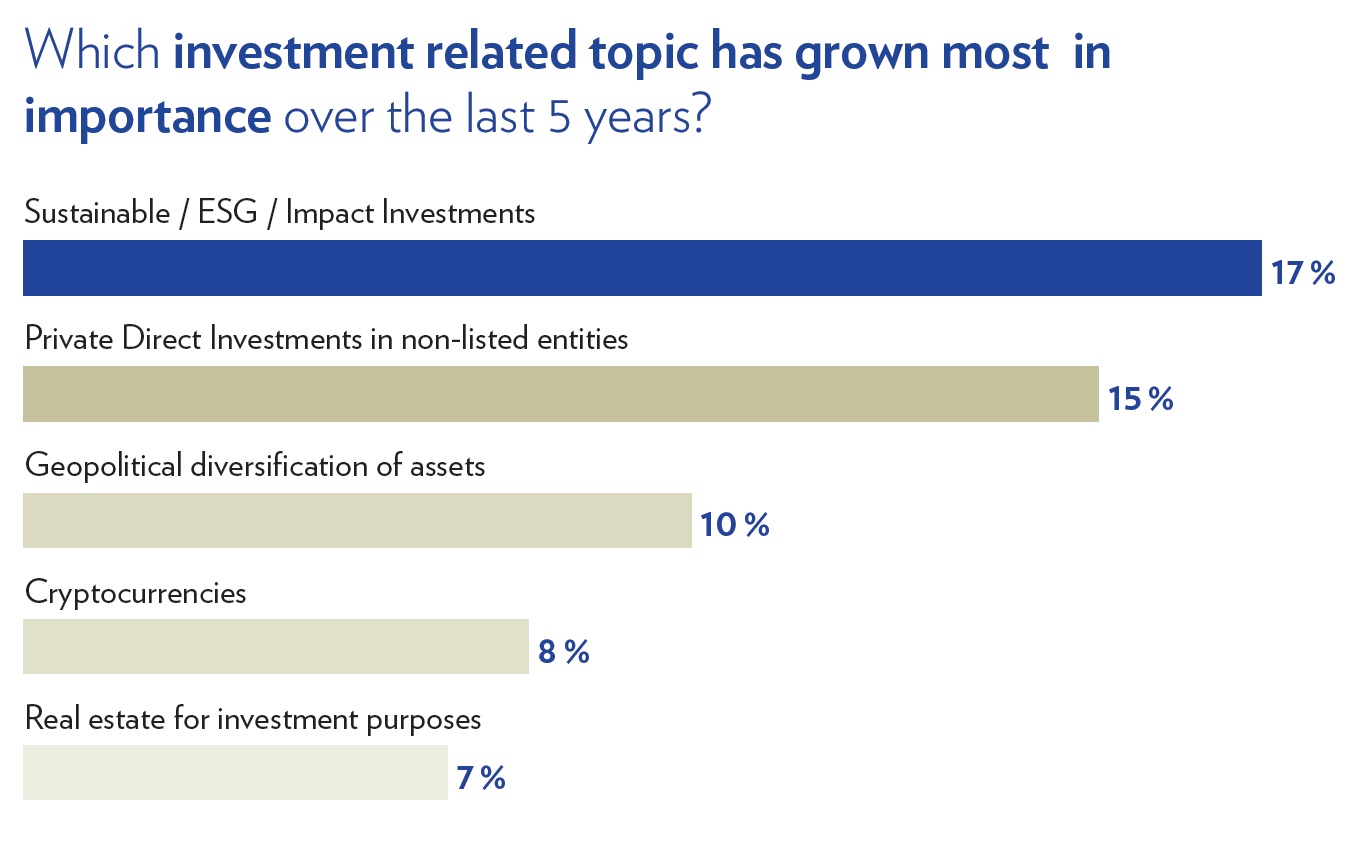 Be more holistic
If MFOs want to scale effectively, beyond stronger governmance, they must also offer a more holistic set of services, the report advised.

"In the investment field alone, the range of utilised asset classes has widened from public to private markets, arguably meaning that it is no longer possible to offer best-in-class investment management without being able to cover areas such as private equity, hedge funds, and direct investments, in addition to the public markets of equities, bonds, and commodities,â the authors warned.

There is also succession and tax planning and a wider remit for philanthropy to consider. âWhile certain services such as wealth planning can be outsourced, much of this expertise must reside in-house,â the report said.

Technology holds many answers
Smart technology adoption will continue to play 'a huge roleâ in helping MFOs scale. âFor a start, client reporting and investment reporting must be done more regularly and to a higher standard, which requires automation and digital communication. Then there is risk management. As regulatory reporting becomes more demanding in many jurisdictions, so technology can simplify the task," the report said.

In addition, keeping track of a multi-asset portfolio is no longer possible without a best-in-class portfolio management system.

âTechnology may be boring to talk about, but the move to internationalisation and more holistic services means that MFOs are growing in size and complexity,â Reymond said. âManual administration is no longer good enough, so how do you deploy tech in a smart way? Elevating it is very important.â

MFOs to transform tomorrowâs super boutiques
Feedback points to MFOs continuing to flourish, especially in Asia and certain emerging markets, where wealth creation is at its strongest. This is likely to spawn a number of âsuper boutiquesâ that will have the international presence, holistic capabilities and technology to service clientsâ increasingly complex needs across jurisdictions.

âThe industry is clearly set for growth in line with the ever-increasing population of wealthy individuals, especially in Asia,â Reymond said. âBeing sufficiently large to matter but still small enough to care will be essential for MFOs to differentiate themselves in such a competitive environment.â

As assets under management have grown considerably for many ultra wealthy families over the past 20 months, the challenge for the industry will be servicing this growth "without sacrificing the high-end personal touch that is so attractive to clients," the report said.