Transpersonal psychology and family offices, two seemingly totally unrelated concepts, are relevant to each other, the author of this two-part article argues, examining some of the dynamics that hold families together and also cause potential problems.

The following article looks at family office and human psychology. It comes from Patricia Woo, who is partner, Hong Kong co-head, at Squire Patton Boggs, in that firmâs family office practice. This article is far from esoteric and speculative: it addresses some of the main challenges families have in working together to protect and build on what they have.

The article is reprinted with the firmâs permission, and this publication is grateful for this opportunity. As always is the case with such content, editorial disclaimers apply. Below the body of this article is a list of references. To respond and jump into debate, email tom.burroughes@wealthbriefing.com and jackie.bennion@clearviewpublishing.com

They control considerable resources and their businesses provide livelihoods for many people. Philanthropic causes and incubation of new technologies are often supported by the richest families. Once, at a private wealth conference, I asked the audience if they would like to be in a world where resources are controlled by families that are motivated by fear or by love? The answer was obvious. Transpersonal psychology is such a versatile, interdisciplinary area of study capable of making sense of a spectrum of religious and spiritual practices without being tied to any particular practice. If UHNW families can have access to transpersonal psychology as a way to realise their fuller potentials or if possible achieve transformation, the discipline should be recognised and incorporated as part of the best practice of such families and their family offices.

UHNW families and approaches to family offices
UHNW individuals generally mean those who have more than $3 million or $5 million of investable assets. Among them, only a small number of UHNW families need and can afford a family office (which could exist as a separate company or other legal structure or a unit within the family business) to manage their affairs. Campden Wealth estimates in its Global Family Office Report 2017 that there are 5,300 family offices, including single-family offices and private multi-family offices, in existence globally. The average family office surveyed in such a report has an average of $921 million in assets under management.

âFamily officeâ as a discipline has not yet acquired a formal definition. One of the perspectives is to divide these offices into two broad types. Some families have an investment-centric family office, primarily to make private investments and generate more wealth. This type of family office is the familyâs asset allocator and manager of internal hedge funds and private equity funds.

Some families set up family offices for the purposes of asset protection and provision of welfare and services to family members. These welfare-centric family offices work with professionals to form and maintain trusts, take out insurance, draft and implement family constitutions, support family councils, hold family meetings, handle immigration matters and settle disputes within and outside the family. I have been advocating a third type of family office, one that adopts a âvalue-centric modelâ.â It is a convergence of the investment-centric and welfare-centric models to offer a total solution for all aspects of the life of an UHNW family (Woo, 2014).

From the value-centric approach to the integral model
Value-centric family offices are self-contained and comprehensive because they generate even more wealth for the families and are able to absorb the costs of providing services to the family. But, are investments and services all that UHNW families need? What about nurturing the familyâs spirituality? Research conducted on the integration of spiritual beliefs or practices into family relationships has shown positive results (Mahoney, 2013). The study of transpersonal psychology has inspired me to acquire additional dimensions in identifying the needs of UHNW families and what family offices can provide.

I have drawn inspiration from Ken Wilberâs Integral Model and a number of its components. The significance of this model is that it maps the relevant elements in the various dimensions of the reality and with which such information, a development path can be planned and implemented. One of the core essences of the model is the distinction between the interior and exterior aspects, and the individual and collective aspects. Displayed as four quadrants, the model becomes (Wilber, 1997):

Figure 1 is the integral or AQAL âall quadrants, all levelsâ model. The upper-left quadrant concerns the interior aspects of an individual, the subjective or the âI.â The upper-right quadrant reflects the exterior of such individual, the objective or the âIt.â The lower-left quadrant refers to the collective, interior view, the âWe,â and the intersubjective, and the lower-right quadrant describes the exterior aspect of the collective, the âIts,â and the Inter-objective. Within each quadrant, there are lines of development to give depth to the left-hand quadrants, and to represent complexities in the right-hand quadrants (Esbjorn-Hargens, 2012). Such a model is âintegral,â as it is capable of providing a complete understanding of the experience/reality and a roadmap to achieve growth, development and transformation in all aspects. The model has had many âreal worldâ applications in such disciplines as politics, medicine, business, education and ecology (Wilber, 2001).

Application to UHNW families and family offices
Figure 2 below shows how the Integral Model can be applied to describe the various dimensions of the life of a member of an UHNW family with a family office. Each dimension is presented not as a quadrant, but as a quadrivium âdirected at a particular realityâ (Esbjorn-Hargens, 2012). Within each quadrivium, three lines of development and examples of the relevant elements for each line are also shown. 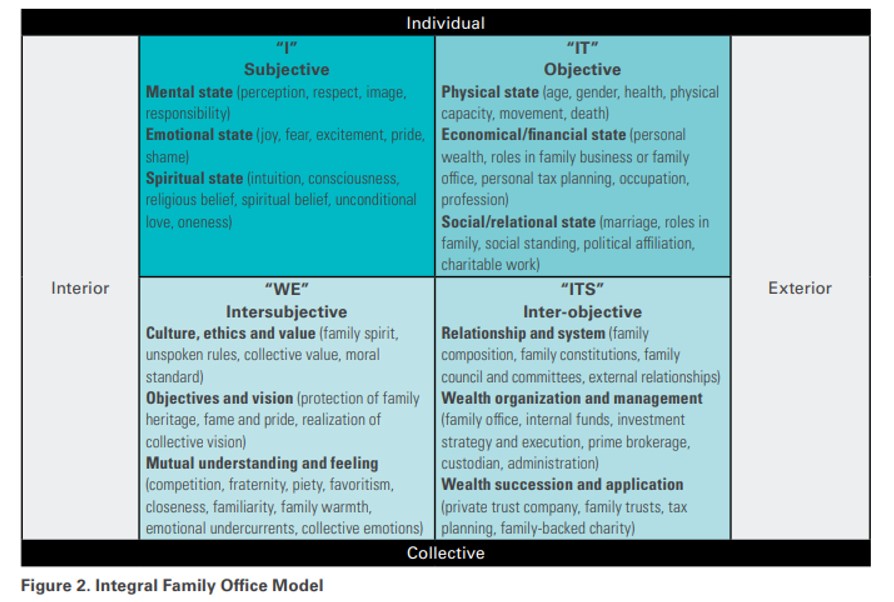 Figure 2 below shows how the Integral Model can be applied to describe the various dimensions of the life of a member of an UHNW family with a family office. Each dimension is presented not as a quadrant, but as a quadrivium âdirected at a particular realityâ (Esbjorn-Hargens, 2012). Within each quadrivium, three lines of development and examples of the relevant elements for each line are also shown. The upper-left quadrivium represents the interior of the family member, and three lines of development (e.g., mental, emotional and spiritual states) are identified. A member of a wealthy family with fame and money would usually have pride for the family and maintain a corresponding self-image. A spiritual state can denote any religious or other spiritual beliefs a family member might hold. Along each line of development is a path along which the family member evolves from one level/stage to another, and the overall direction is from an egoist stage driven by fear to a more enlightened stage filled with love.

The upper-right quadrivium represents the exterior of the family member in the three lines of developments (e.g., physical state, economic/financial state and social/relational state). They represent the personal, tangible aspects of such a person, including bodily health, wealth, occupation/professional and different roles in the family, family business and family office. Positive developments along these lines would be seen when the family member goes beyond attaining personal glory and sees himself or herself making active, positive contribution to the family and the society.

The lower-left dimension deals with the collective, shared, subjective aspect of the family in which the individual is a member. There are three lines of developments (e.g., culture/ethics/value, objectives/vision and mutual understanding/feeling). Unless the family constitution is well written, the elements in this dimension are largely unspoken and undocumented. Typical examples are entrepreneurial spirit stemming from the familyâs particular background and heritage, and emotional undercurrents (usually competitive) among family members. The stages of development should ideally shift from exclusive to inclusive and from competition to compassion.

The lower-right quadrivium depicts the collective exterior of the family, including relationships and family system, family wealth organisation and management, and family wealth succession and application. These are the visible, organised aspects of UHNW families, the sophistication of which depends on the service level of the family office and the familyâs advisor and whether the family is long established or newly wealthy. Family systems and wealth structures are usually defensive and fear-driven when first developed because the primary concern is asset protection. When a family moves along the lines of development, the focus would become more love-driven and to encourage the family to also see the good in the self, family and society.