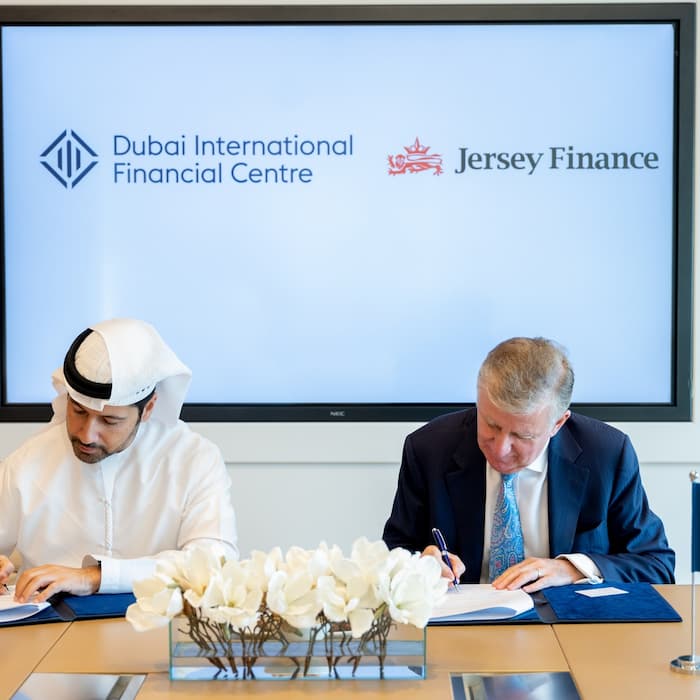 Jersey Finance also marked the tenth anniversary of its office opening in Dubai. The organisation held a series of presentations in the jurisdiction last week, also issuing a report on the intersection of Shariah finance and wealth management.

Jersey Finance, the agency promoting the islandâs financial services industry, has extended its relationship with the United Arab Emirates by signing a memorandum of understanding with the Middle East jurisdiction.

The MoU was signed with the Dubai International Finance Centre Authority, paving the way for closer collaboration over the coming years. The signing was attended by Joe Moynihan, CEO of Jersey Finance; An Kelles, director â GCC; and Faizal Bhana, director â Middle East, Africa and India, at Jersey Finance.

The MoU followed shortly after the Government of Jersey also signed a new bilateral investment treaty with the UAE to support investment flows between the jurisdictions and protect investors.

Coinciding with the MoU, Jersey Finance launched a study into the attitudes towards the Islamic finance wealth management market by Muslim high net worth individuals. The Global Attitudes to Islamic Wealth Management report takes into account the views of more than 2,000 respondents across the markets of the UK (London), Asia (Kuala Lumpur), the GCC and Africa (South Africa).

Among the findings were that 96 per cent of Muslim HNW individuals are actively planning or preparing for wealth succession, with more than half (57 per cent) planning to seek tax advice, and nearly two-thirds (63 per cent) seeking Shariah compliance advice. The Islamic finance investor base is becoming ever more sophisticated, demanding greater professionalism from financial service providers, while continuing to adhere to Shariah principles. Also, Islamic HNW individuals are taking an active interest in ESG and ethics when making financial decisions, yet more than half rely on their own knowledge to do so.

Jersey Finance set up its first office in the UAE 10 years ago.