Too much focus on the ageing theme disregards stronger and even more powerful structural trends from which healthcare investors can benefit, the author of this article argues.

Last week saw a controversial move by the UK government, led by prime minister Boris Johnson, to push up National Insurance contributions (for the benefit of non-UK readers, NI is, a form of payroll tax) to help pay for the National Health Service and residential care. Regardless of whether this was smart public finance or politics (we can leave those debates for others), the affair certainly reminds us of how an ageing population and rising expectations of medical care are big policy headaches. Whether the funding comes from taxation or private contributions in a free market, these forces will be a major part of investment and business in coming years. There are investment opportunities to be had. And wealth management clients need to be on their game.

To discuss these issues is Kay Eichhorn-Schott, portfolio manager at Berenberg Wealth and Asset Management. He points out that the trend of an ageing population is not a sure route to improved healthcare investment outcomes. This is also a global concern, and important in countries such as the US, which has large private sectors.

The editors are pleased to share these views on this very important topic, and invite responses. The usual disclaimers apply to views of outside contributors. Jump into the conversation. Email tom.burroughes@wealthbriefing.com and jackie.bennion@clearviewpublishing.com

Many members of the investment industry have long argued that the ageing of Western societies is providing a strong secular tailwind for healthcare companies. This is an important insight but the ageing trend alone is not enough to ensure success for investors in healthcare. Many healthcare companies face an uphill battle to turn a profit, while others come with binary risk profiles; one poorly performing drug and they are in the red. Demographics wonât necessarily save them.

However, a glance at the statistics might suggest that those betting everything on ageing have it right. According to the United Nations, in 2020, 9 per cent of the worldâs population was 65 and older with the percentage rising to 16 per cent by 2025 and 23 per cent by 2100. We all realise that the elderly consume more healthcare dollars than the young. A statistic from the Kaiser Family Foundation illustrates this well: people over 65 represent only 16 per cent of the US population but account for 36 per cent of healthcare spending (see Figure 1). As societies age, so, the argument goes, healthcare spending is set to balloon and healthcare investors will benefit.

There is a big problem with this argument. It rests on the assumption that expenditure per capita will stay constant. Yet it is unwise to rely on this assumption.

Figure 1: People aged 55+ account for more than 50 per cent of healthcare spending in the US 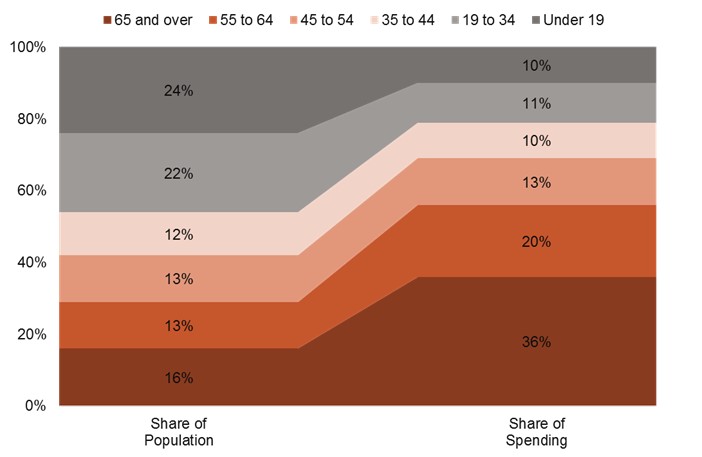 When considering todayâs global healthcare expenditure (see Figure 2), a continuation of higher and higher health spending simply does not seem sustainable. In the worldâs largest healthcare market, the US, already 17 per cent of GDP is spent on healthcare, a number that the country cannot afford to increase much further. In fact, we expect that the US will need to find ways of reducing healthcare spending per capita. This could be through price erosion or simply by finding more efficient ways of delivering the same quality of care. Betting on a continuation of higher healthcare spending driven by ageing doesnât take this into account. Ageing alone will not drive abnormal growth for many companies.

Figure 2: Healthcare spending is on the rise 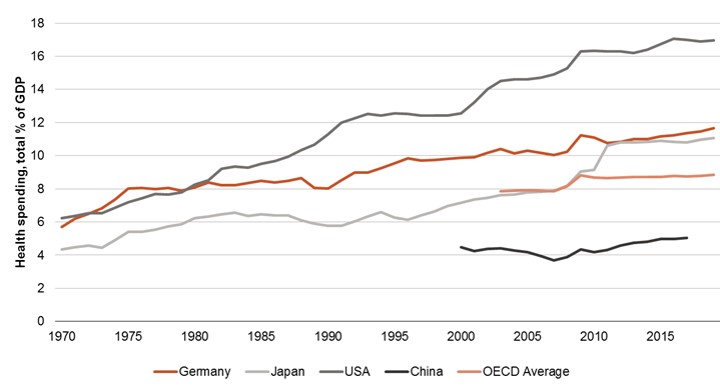 Rather than investing broadly in the ageing trend investors need to find companies benefiting from more specific and stronger tailwinds. One of these trends is the rise of biologic drugs. In contrast to traditional drugs, biologics consist of larger and more complex molecules, which also require different production processes. In recent years, we have already seen a strong shift towards these new drugs as they are more targeted and for that reason also more effective. Monoclonal antibodies are the largest group of biologic drugs; however, there are also new biologic drugs on the rise, such as antibody drug conjugates (ADCs), bi-specific antibodies or cell and gene therapies.

Interestingly, much of the innovation in biologic drugs happens at smaller companies like biotechs rather than big pharmaceutical companies, as illustrated in Figure 3. The advent of COVID-19 vaccines based on the messenger RNA (mRNA) technology serves as a great example of this phenomenon. It was not the large pharmaceutical companies that came up with these life-saving treatments, but previously small and relatively unknown biotech companies like BioNTech and Moderna.

Figure 3: Biologic drugs are on the rise

Investing in small biotechs presents a completely different challenge. Often, such companies have limited revenues today and are loss-making. Whatâs more, their success may depend on one or a few pipeline products, so the range of outcomes from complete failure to huge success is wide. If investors do not have strong convictions in the pipeline, they should stay away. To still benefit from the overall rise in new drugs from smaller players, without exposure to this very binary risk, we prefer investing in companies supplying the drug developers.

Figuratively speaking, in the biologics gold rush, we prefer investing in the shovels rather than the gold miners. One such shovel is Lonza, a contract development and manufacturing organisation (CDMOs).

The company is a specialised manufacturer of pharmaceutical ingredients and end-products for pharmaceutical and biotech customers. Lonza benefits from the strong demand for biologic drugs and an increased appetite for outsourcing manufacturing. Pharmaceuticals are increasingly relying on CDMOs to manage their manufacturing capacity more flexibly. In addition, as drugs become increasingly complicated, CDMOs can offer expertise that their customers do not have.

CDMOs such as Lonza typically have a large number of customers and are not dependent on any one drugâs failure or success. For example, Lonza has formed a multi-year partnership with Moderna that extends beyond COVID-19 vaccines and entails developing and manufacturing vaccines against flu. Historically, the vaccine market has been an oligopoly between many large incumbents that largely produce their vaccines in-house. With the rise of mRNA vaccines, newer players will probably enter the market and rely more strongly on CDMOs such as Lonza for production.

The outsourcing trend in the pharmaceutical industry goes even further: not only is manufacturing increasingly undertaken externally but the innovation and drug discovery process is outsourced too. The reasoning is straightforward. Due to higher regulatory standards and treatment targets becoming more complex the development costs for drugs have risen considerably. At the same time, the potential payoff has shrunk as drugs become narrower in their application and more targeted in their patient population. Deloitte estimates that the average development cost per pipeline project increased by 84 per cent to $2.4 billion between 2013 and 2020. Yet, during the same time, average peak sales per asset decreased by around 19 per cent to 421 million. Unsurprisingly, returns on R&D expenditure have seen a steady decline.*

To fight this, pharma and biotech companies are increasingly partnering with clinical research organisations (CROs), such as the German company Evotec, to identify drug targets, develop molecules and also manufacture the final product. Evotec has developed a model in which the company also invests in a number of pipeline projects where it partners with pharmaceutical companies, such as Bayer or Bristol-Myers Squibb for further development. The model has been successful to date and the entire industry is experiencing strong demand for these collaborations between large pharma partners and small innovators.

In conclusion, investing based on the ageing theme alone is risky because healthcare spending per capita, especially in the markets like the US, could easily start to decline. Too much focus on the ageing theme also disregards stronger and even more powerful structural trends from which healthcare investors can benefit. The rise of biologic drugs and the increasing use of outsourcing are two examples. The healthcare investment universe does present long-term oriented investors with a large opportunity set of innovative companies with strong growth prospects and sustainable competitive advantages but they have to know where to look.

*Deloitte 2021, Seeds of Change, Measuring the return from the Pharmaceutical Innovation