France is second only to Brazil as being the most complex jurisdiction in which to do business, while Denmark is the most straightforward, followed by Hong Kong, according to the  professional services firm 's Global Business Complexity Index (GBCI).

The study analyses rules, regulations, tax rates, penalties and compliance requirements across 77 jurisdictions, which account for 92 per cent of the world's total GDP and 95 per cent of net global foreign direct investment flows. In total, 292 indicators are tracked annually, offering data on aspects of doing business, including how fast a firm is incorporated, payroll and benefits requirements, and compliance procedures. 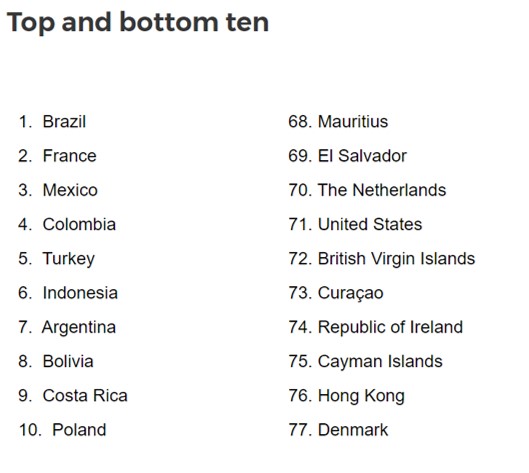 “Despite the introduction of "Business France" – a website to assist foreign companies to remain compliant with French accounting standards – businesses may still struggle due to the constant changes to those standards. HR and payroll is also heavily regulated, and employment litigation outcomes are usually in favour of employees. Firing an underperforming worker can take up to 12 weeks, as opposed to one week in Ireland, for instance,” TMG Group said.

Staying with Europe, TMF noted that Poland, which was ranked 34th most complex country in 2020, is now the 10th least business-friendly country in which to operate globally.

“Reasons can be found in an always evolving legislative scenario, which leaves business little time to react and implement changes in accordance with new laws. In addition, despite the government having adopted electronic signatures, Polish authorities don't accept many international signature providers, and instead require signatures from specific local providers, adding to complexity in the jurisdiction,” it continued.