Central banking faces three pressing challenges: debt, digital and climate. The author of this article thinks that such banks will change how they conduct policy. Meanwhile, the spectre of inflation is back, perhaps unsurprisingly after a period of large money printing to inoculate the financial system against heavy government borrowing. The rules of economic life haven’t been suspended, so what does this mean? Here is Fabrizio Pagani, global head of economics and capital markets strategy at , to explain more.

The editors of this news service are pleased to share these insights and we invite readers to jump into the conversation. The usual editorial disclaimers about the views of outside contributors apply. Email tom.burroughes@wealthbriefing.com and jackie.bennion@clearviewpublishing.com

Central banking is facing three pressing challenges: debt, digital and climate. We believe that the response to these challenges by the major central banks will change the nature of monetary policy and the role of central banking in the economy and society at large.

Debt
Since the 2007/2008 Great Financial Crisis (GFC), central banks have enriched the toolkit of monetary policy by introducing new non-standard instruments and enhancing existing ones. Among these unconventional policies, quantitative easing stands out. As defined by Ben Bernanke, “Quantitative easing involves central bank purchases of securities in the open market, financed by the creation of bank reserves held at the central bank.”

Major central banks have engaged in quantitative easing (QE) in the years following the GFC and have made further, massive, recourse to this instrument in response to the COVID–19 pandemic. The Federal Reserve (Fed), European Central Bank (ECB), Bank of England and Bank of Japan have all undertaken quantitative easing. 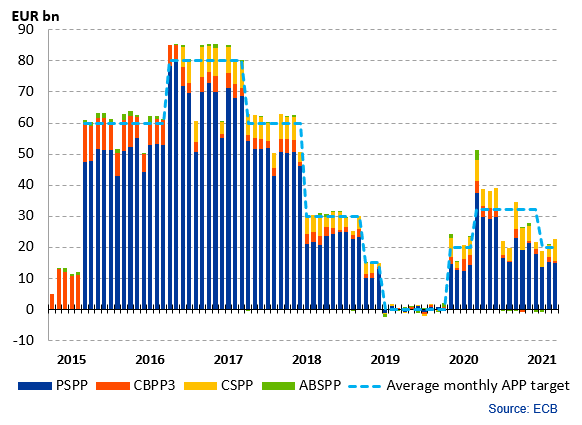 In the last decade, central bank balance sheets have grown dramatically. For example, the amount of bonds bought by the Eurosystem through its different programmes (APP and PEPP) stood at around €4,000 billion in mid-April 2021.

The ECB and Fed will end up owning between 25 per cent and 30 per cent of their governments’ debt, and the Bank of Japan over 40 per cent.

Existential questions loom over this debt, well beyond contingent issues about the length of the extension to the current purchase programmes. Will central banks embark on an indefinite roll over, possibly extending the maturity? Will this debt eventually be made perpetual or even cancelled as has been proposed? In the case of the European Union, will the ECB progressively replace national debt with a supranational one issued by the Commission under programmes such as the Next Generation EU?

Each central bank has its own mandate, culture and practices and these questions can, possibly, find narrow, technical answers according to each jurisdiction.

However, there is a general interrogative on the long-term role that central banks will play vis-à-vis the increasing levels of government indebtedness and the rising amount of national debt which they own. Perhaps we have not yet reached a time to answer these questions fully.

Digital
In recent years, we have seen an acceleration in the pace of digitalisation in all aspects of the economy and within society more broadly. A technological revolution is taking place: money could not remain unaffected. Indeed, it is not the first time that money has undergone a radical technological transformation and each transformation, such as from gold coins to banknotes, has had its own challenges. There is much confusion on the exact definition of the digitalisation of money. It is a notion that includes different phenomena such as electronic payment systems, the most successful being the digital wallets of China’s WeChat and Alipay; the emerging array of fiat cryptocurrencies, such as the popular bitcoin and “stablecoins” on blockchain; and the possibility of central banks issuing digital currencies.

Countries have been assigned one of five categories: (1) addressing a present day challenge, (2) exploring possible future capabilities, (3) not pursuing research and experimentation, (4) unclear motivations, and (5) not available.

For some time, the Bank of International Settlement (BIS) has been trying to find clarity and provide some early taxonomy.

The challenge for central banks will be to combine the fast-evolving world of digital technologies with the mandate of stability entrusted to them and descending from their mandates. Much preparatory work is necessary and there are numerous areas to be solved, e.g., access, privacy, safety, anti-money laundering, possible restrictions in use, remuneration etc.

The digitalisation of the currency opens a realm of possibilities and its introduction could have wide ramifications. Monetary policy could be transformed. Looking into CBDC remuneration, effects could be manifold. For example: i) the transmission of interest rates to household deposit rates could become more direct; ii) the case for negative interest rates, what economists call the “zero low bound problem” could disappear; iii) remuneration could be tiered, with different interest rates applied in different cases. On the latter point, which could open fascinating policy avenues, the ECB writes that CBDC would “allow the Eurosystem to pay less attractive interest rates on large holdings of digital euro or on holdings by foreign investors in order to discourage excessive use of the digital euro as an investment or to mitigate the risk of attracting huge international investment flows”.

In 2017 the Network for Greening the Financial System (NGFS) was created, which gathers over 80 monetary authorities and financial regulators across the world. The Fed joined in December 2020. The NGFS helps “strengthening the global response required to meet the goals of the Paris agreement and to enhance the role of the financial system to manage risks and to mobilise capital for green and low-carbon investments in the broader context of environmentally sustainable development.” .

Make the interest rate for central bank lending facilities conditional on the extent to which a counterparty’s lending (relative to a relevant benchmark) is contributing to climate change mitigation and/or the extent to which they are decarbonising their business model.

Charge a lower (or higher) interest rate to counterparties that pledge a higher proportion of low-carbon (or carbon-intensive) assets as collateral or set up a credit facility (potentially at concessional rates) accessible only against low-carbon assets.