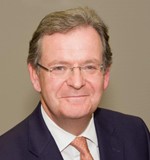 VAR Capital, based in London's Mayfair district, has been created by individuals with extensive experience in banking, asset management and family offices.

The former chief executive of Sandaire, James Fleming, has been named advisory board vice chairman of VAR Capital, a firm that has made a number of senior appointments. Sandaire, the multi-family office, was bought by UK-listed Schroders last year.

Fleming (pictured) has been head of international private banking at Coutts and managing director at SG Hambros, as well as vice chairman of Arbuthnot Latham Private Bank.

VAR Capital, based in Mayfair, London, was founded by individuals with extensive experience in banking, asset management and family offices.