Gold may not have the tech "cool" of cryptocurrencies such as bitcoin at the moment but it's been a store of value over the centuries. As inflation clouds gather, so are asset allocators looking at the yellow metal.

Concerns about inflation as governmentsâ massive central bank money printing efforts, coupled with dislocations caused by the pandemic, are encouraging institutional investors to hold the classic hedging tool of gold, so figures show.

A survey of 477 institutional investors around the world showed that demand for inflation-hedging tools is helping to drive allocations to gold, a report published by the World Gold Council, the body representing mining, trading and investment organisations, said. The report was compiled by the research group, Coalition Greenwich, between October 2020 and January this year.

Recent inflation numbers have started to stoke concerns that the sheer amount of central bank quantitative easing â as banks have bought up government debt â is starting to make an impact. Dislocations to some global supply chains is also held to be a factor. In the US, for example, the consumer prices index rose at an annual rate of 5 per cent in May, up from 4.2 per cent in April and the highest since August 2008. For investors used to tame consumer price numbers for the past decade, the figures are a jolt.

Gold has in some ways taken a back seat to cryptocurrencies in recent years as a talking point about how to protect against inflation and government policy shifts, but gold remains an important asset class and central bank reserves asset. The third iteration of âBaselâ rules, which set risk capital weights banks must use, has the effect of classing physical gold â as possible to proxies such as gold certificates or ETFs â as a zero-risk asset. Banks holding gold proxies must set aside more reserves. New rules came in at the end of June.

Investors around the world are responding to signs of rising prices, injecting new volatility into global financial markets. "For the most part, however, Western policymakers view recent price hikes as temporary effects of an economy emerging from a pandemic-induced slumber,â the Coalition Greenwhich report said.

âLargely unfazed by the inflation threat, the US Federal Reserve appears committed to maintaining both its asset purchase programme and its low-interest-rate policy, and the Biden administration continues to support stimulus and spending packages that together would inject trillions of additional dollars into a US economy that some fear is already overheating.â

Some 45 per cent of study respondents include interest-rate projections as one of the top three drivers of long-term portfolio allocations. For short-term allocations, half of institutions cite liquidity concerns as a top-three driver, and around 40 per cent cited interest-rate projections, reflecting concerns about both near-term market conditions and the threat of inflation, it said.

About one in five institutions have specific allocations to gold in their portfolios. Allocations are most common among institutions in Europe, the Middle East and Africa (29 per cent) and among the worldâs biggest institutions, or those with more than $10 billion in assets (27 per cent). The average gold allocation for investors who own or include gold in their policy portfolio was 4 per cent. Almost 40 per cent of current gold investors expect to increase their allocations in the next three years, and about 40 per cent of institutional investors who do not have gold exposure but have a target or have considered it, plan to make an investment in that time frame, it said. 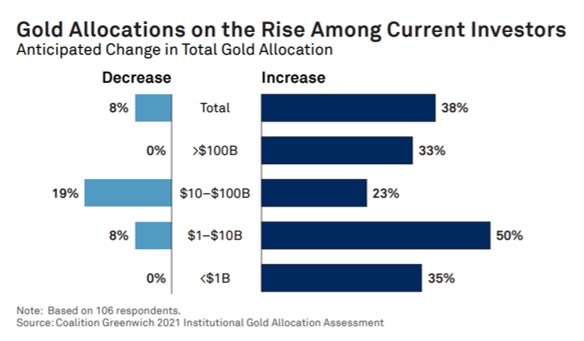