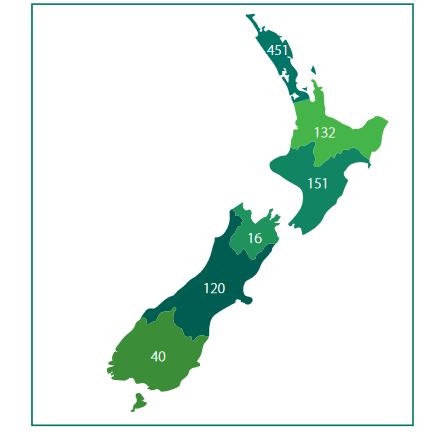 Between 26 February and 15 March 2020 the Financial Action Task Force, the world's anti-money-laundering standard-setter, sent a team to evaluate the AML efforts of New Zealand. Its recently-released report indicates that the intensity of supervision in the most risky sector, i.e. banking, is inadequate because the Reserve Bank of New Zealand lacks resources.

New Zealand has three supervisors (the Reserve Bank of New Zealand (RBNZ), the Financial Markets Authority (FMA) and the Department of Internal Affairs (DIA)) which oversee financial institutions' compliance with AML rules. However, no agency is empowered to supervise the implementation of "targeted financial sanctions obligations" and the FATF is critical of this.

According to the FATF, the scope and depth of supervision for each part of the financial sector is broadly commensurate with its risk level, except for the banking sector, where the scope and depth of inspection is not properly in line with the risk and complexity of the banks that the regulators are inspecting. This is partly because the RBNZ does not have enough resources to conduct AML inspections. The RBNZ generally subjects 'highly risky' banks to on-site AML inspections once every two years.

The RBNZ is responsible for the licensing of registered banks (along with non-bank deposit takers and life insurers) and the FATF is at least satisfied with the regulator's licensing processes for banks, calling them "robust." These processes include the verification of the "fitness and propriety" (e.g. criminal record checks and home regulator checks) of chief executive officers, directors, senior managers and people with "significant interests" in those banks. Between 2016 and 2019, there was only one new registered bank and no application was refused or withdrawn.

The FATF's priorities for New Zealand

In its report, the FATF calls on the jurisdiction's government to do the following.

By way of explanation, the FATF has written elsewhere that "the term 'targeted financial sanctions' means both asset freezing and prohibitions to prevent funds or other assets from being made available, directly or indirectly, for the benefit of designated persons and entities."

The evaluation team, sometimes known as the assessment team, came from Russia, Hong Kong, Australia, Bahrain and India. It met a few reporting entities from the relevant sectors and some trade bodies. It interviewed seven banks. The FATF knows that it cannot take these meetings to be representative of all reporting entities, but also notes that the assessment team's conversations with them did not reveal any serious inconsistencies with the sector-wide findings outlined in New Zealand's National Risk Assessment (something that the FATF now obliges all its members to produce annually), sectoral risk assessments and supervisory reports.

For politically-exposed persons or PEPs, the country's AML/CFT Act does not include domestic PEPs and the FATF is critical of this. Some of the banks have processes that spot domestic PEPs but reporting entities on the whole do not spot them, nor do they undertake "extra/enhanced due diligence" or EDD (i.e. especially intense background checking, monitoring and other types of checking) when they do.

One of its concerns about the implementation of EDD by reporting entities stems from the fact that they are applying a âDay 2â screening process to spot PEPs and people subject to targeted financial sanctions. This may be leading them to strike up relationships and activate accounts with customers before they ascertain their status as PEPs or as targets for sanctions.

Another worry for the FATF is the re-screening of customer-related databases. This occurs at distant intervals - sometimes weekly, sometimes monthly and, in some cases, annually. The standard-setter blames this on "the lack of guidance from the relevant authorities and absence of supervision for targeted financial sanctions implementation." It does, however, note that international banks, as part of their group-wide processes, do have procedures to screen customers pro-actively to see if they are PEPs or the subjects of targeted financial sanctions.

The implementation of AML controls at banks and other large financial institutions is, therefore, of a good standard. There is room for improvement regarding PEP and sanctions screening and also regarding CDD ("customer due diligence," i.e. background checks) for existing customers and group-wide money-laundering risk management.

The FATF also notes that the country's banks and large securities houses are generally aware of the need for, and generally follow, adequate CDD and recordkeeping procedres. Some banks conduct assurance checks and deploy centralised teams for on-boarding customers.

There are also instances of de-risking, i.e. the practice of giving up customers because the burden of compliance is too onerous. These instances happen in relation to banks' business relationships with virtual asset service providers (VASPs) and the providers of money or value-transfer services (MVTS). Some banks are obviously ending business relationships to avoid spending huge amounts of money to deal with the money-laundering risks that they have spotted. Most of the banks that the FATF evaluation team interviewed said that business with VASPs lay beyond their "risk appetites."